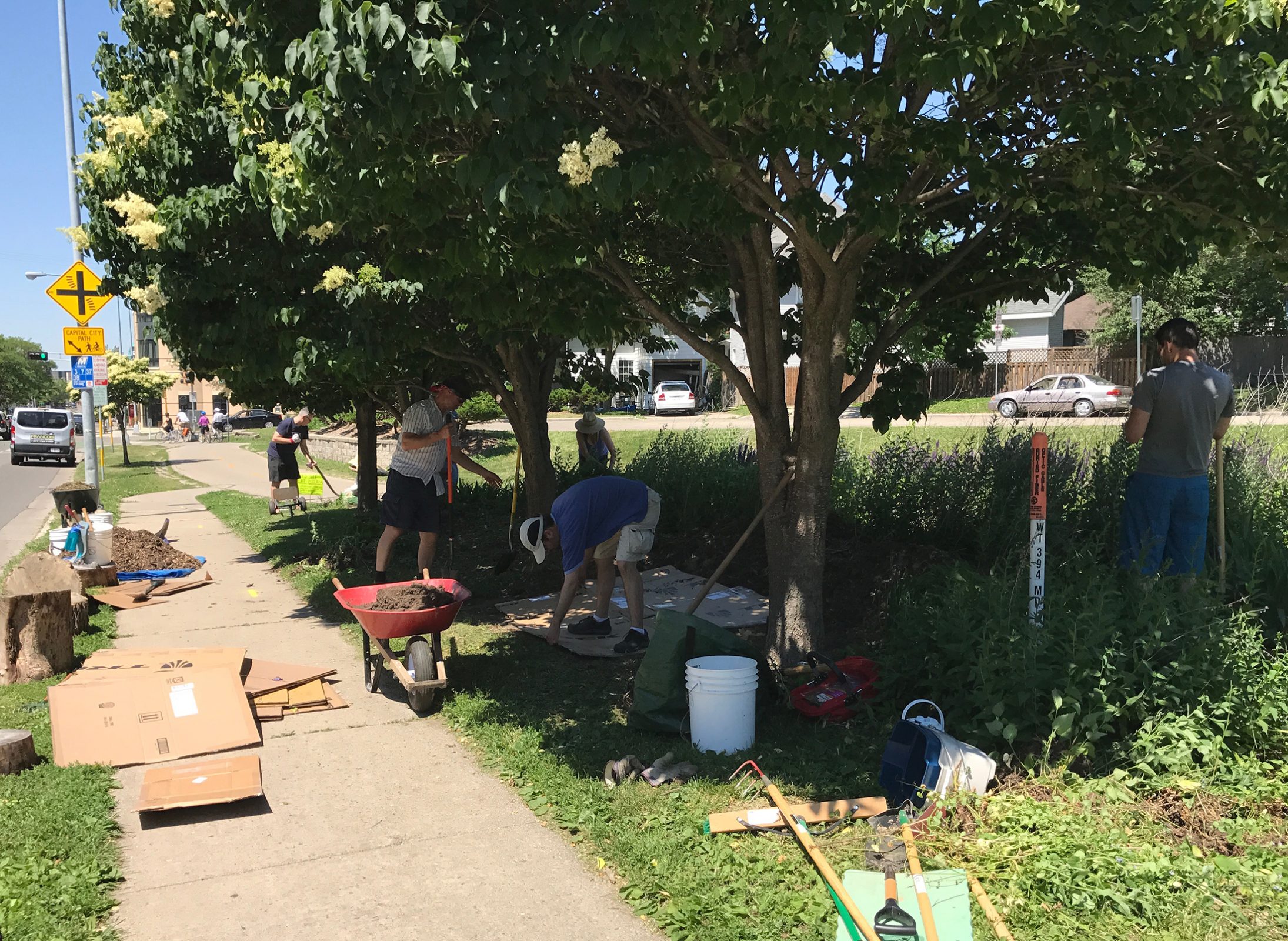 The purpose of this ad hoc committee is to research and analyze ordinances and practices related to terrace and yard plantings; report to the SASY Council as indicated; and work with SASY, city staff, and the SASY alderperson to update ordinances to better reflect SASY neighborhood and wider community values and expectations.

A survey of 91 properties in the heart of the SASY neighborhood showed that the majority (71%) of terraces and front yards in the neighborhood are in violation of restrictive city of Madison ordinances which broadly prohibit many plantings in terraces and private front yards. For example, prohibited are anything but grass within two feet of the curb; plantings; plantings and fences over three feet high within a ten-foot triangle next to driveways in each front yard and terrace; any overhang of vegetation, including grass, over the sidewalk; erection of any permanent structure on terraces, including vegetable boxes; grass over eight inches tall, including ornamental grasses; The city inspects and cites property owners for violations of terrace and yard planting ordinances upon submission of a complaint. The only exception is for plantings for the sole purpose of erosion control.

The “violations” in the SASY neighborhood almost without exception appear to enhance rather than detract from the appearance of the property and neighborhood. For example, property owners frequently plant flowers on terraces and within ten feet of their driveways to beautify their properties, and appear to value flowers, bushes and other plantings instead of the look of plain grass. Flower beds in terraces, and other out-of-compliance plantings are clearly planted with deliberation, and with the intention of enhancing the property and neighborhood, which in almost all instances is the result. Most are kept up neatly and are weed-free and orderly.

Property owners cite many reasons to minimize grass mowing, including initiatives to foster bees, which are currently in danger of extinction, by planting flowers; initiatives to foster Monarch butterflies; plantings that filter and remove polluting chemicals from entering the city storm water system by minimizing grass and the phosphorus and chemicals frequently applied to grass, which foster algae blooms in the lake near this lakeside neighborhood; reducing air pollution from the two-stroke engines used in gas-powered mowers used to maintain grass at the required height; and reducing air pollution from electric mowers (the majority of electricity plants use coal as their power source in Wisconsin). Reducing use of fossil fuels minimizes the property owner’s impact on climate change .If a complaint is filed against a property for such a “violation,” the city inspects, cites, and takes such cases to court unless the plantings and structures are removed. Such a large number of out-of-compliance terraces and front yards (71%) in the SASY neighborhood indicates neighborhood standards and values are so substantially different from current ordinances as to render such ordinances, as applied to this neighborhood, hopelessly obsolete and not reflective of current neighborhood values.

In 2014 one or more (anonymous) complainants systematically walked through one neighborhood and submitted over thirty complaints. While most property owners proceeded to dismantle vegetable boxes in their terraces, rip out their flowers and plant grass instead, at least some did not and after re-inspection, are being taken to court by the city.

It is a significant expenditure of scarce city resources for Building Inspection to process plantings complaints, inspect and re-inspect properties, and for the City Attorney’s Office to process such information and take cases to court. We argue these expenditures are largely unnecessary and indeed counterproductive given current SASY neighborhood values, as documented in our survey. The current city budget, we argue, is already stretched with too many more important functions than to waste time enforcing obsolete ordinances.

The purpose of this committee is to research and analyze such ordinances and processes; report to the SASY Council as needed; and work with SASY, city staff and the SASY alderperson to change such ordinances to better reflect neighborhood and wider values and important climate-initiatives.

Be a Member, or Renew Your Membership
Renewal Options
Scroll Up